It’s been a tough winter.  The toughest winter of all in this country has been what the snow-assaulted, snow-beleaguered, snow-burdened Bostonians have been (and are still) suffering through.  So, as a small virtual respite from cold weather, I’m offering the conclusion to my series of posts about moths.  The incident related here took place a few years ago in August . . . thus the profusion of flowers and, unexpectedly, the creature we found among them.

On the one-ton temple bell
a moon-moth, folded into sleep,
sits still.

One summer afternoon, during a visit from our friend Dianne, my wife and I show her the front flowerbeds. The previous owners of the house had operated a commercial flower business on Long Island for many decades, and they had lavished great skill and attention on their own property as well, so the gardens on Hyland Hill delighted us from the outset with their size and the variety and splendor of their plantings. Now Edith and I want to show them off to Dianne, herself an accomplished gardener. The front bed is especially lush at that point of the summer.

Dianne is impressed. At one point, however, as she comments on the various flowers and their proper care, she suddenly interrupts herself and exclaims, “Look, a baby hummingbird!”

What she points out is so small––just a little over an inch long––that I can’t see it at first. Soon it is unmistakable. Flitting, hovering, darting about, this little bird pokes its needle-narrow beak into the tiniest flowers, then withdraws, then angles about to probe the next bloom. 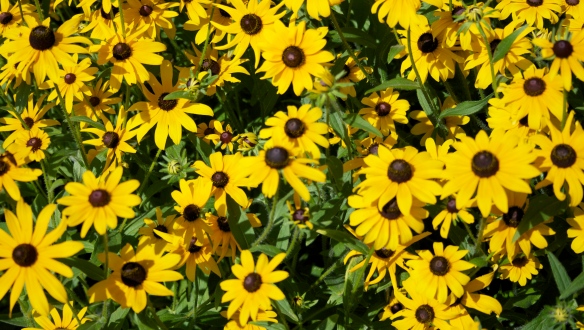 A stirring sight! I have long delighted in these tiny, unimaginably agile creatures. Here now is one even smaller than the miniscule birds I’ve observed in Mexico, Colorado, Peru, Singapore, and elsewhere. It doesn’t seem possible that something so delicate, so beautiful, so perfect can exist.

The three of us watch in silence for a long time.

Something soon puzzles me. Yes, the wings beat so fast as

to be almost invisible. Somehow they seem different, though, not quite as rapid as what I’ve seen on other hummingbirds in the past. A consequence of this one’s size, perhaps?  Or of its youth? I can’t even guess. Yes, the tiny bird pokes its beak into the flowers . . . but somehow with a slightly different motion, or in a slightly different way, from what I’ve observed in the past. Intrigued, I edge closer to get a better look. The bird may or may not notice me, but in any case it keeps moving from flower to flower. I expect it to zip away at a moment, but it allows me to draw near.

Then I see something I would never have expected: antennae. Stepping closer still, I spot another feature out of keeping with a hummingbird’s: legs that dangle from the tiny body. Two legs . . . No, four legs . . . No, six. 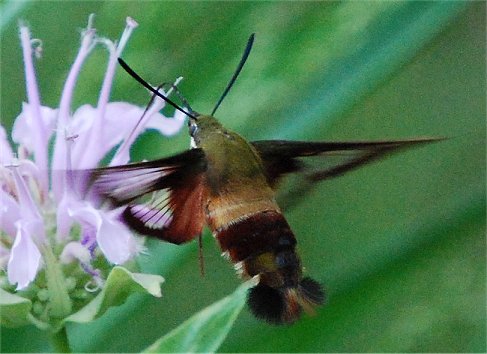 The hummingbird isn’t a hummingbird at all––it’s a moth. As I learn later, it‘s Hemaris thysbe, the so-called hummingbird clearwing moth. First identified in 1775 by Johan Christian Fabricius, a Danish naturalist, members of this species are common throughout the entire eastern half of the United States and in much of Europe; and, according to several articles I’ve read, they are frequently mistaken for hummingbirds because of their coloration and fast-moving wings. They may also have contributed to the legend of faeries in England and elsewhere. Our perceptual error in the garden is understandable. 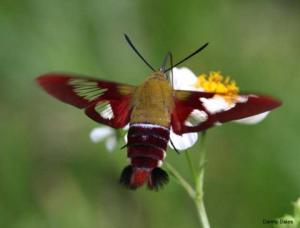 But at that moment, the moth itself—delicate, gentle, languid in its motions—transfixes all three of us simply for existing, simply for being there. I am not a mystic who feels drawn to see the moth, whether immolated or merely airborne, as a promise of Reality beyond reality, of Life beyond life. Moths are intriguing in the moment and for the moment. I’m not convinced that there is transfiguration or metamorphosis of what lies right before us. There is no fleshly transcendence, only immanence. There is perfection in the here-and-now: the day warm and bright, the air still, the flowers resplendent, the hummingbird-impostor moth beautiful and beguiling as she makes her rounds among the blossoms.

Fabricius, Johan Christian. Biographical Sketches in The Bulletin of the American Museum of Natural History, 1901, pp. 61-62.

Snowfall continues––three inches one day, two the next, six the next, four the next.  The snow itself is light but adds up and stays put.  Edith and I estimate that there’s a yard of snowpack on our meadow, and the piles around our parking area stand five, six, even seven feet tall.  More problematic is what accumulates on the roof.  A foot of snow spread out on a roof can weigh many hundreds of pounds.  Now and then we use a bizarre tool called a roof rake––essentially a wide, flat, transverse scoop attached to a thirty-foot aluminum pole––to pull the snow down.  The front porch remains a special problem:  so flat and deep that removing snow is difficult.  Somehow we manage. One strange benefit of snow on the porch roof, however, is that it slides forward, curves, thins, and forms a curtain that’s often beautiful.  This situation created December’s shipment from the Ice of the Month Club.  Here, now, is Shipment #3––a 20-inch span of thicker, denser fringe.  Courtesy of a salmon-hued dawn:  salmon-hued ice.